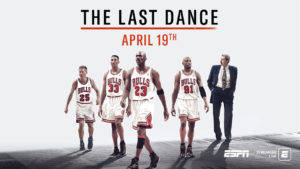 Today it was announced that the premiere of “The Last Dance,” the highly anticipated 10-part documentary series will air on ESPN in the U.S. on Sunday nights over five weeks from April 19 through May 17. The series will also be available outside of the U.S. on Netflix.

This site uses Akismet to reduce spam. Learn how your comment data is processed.